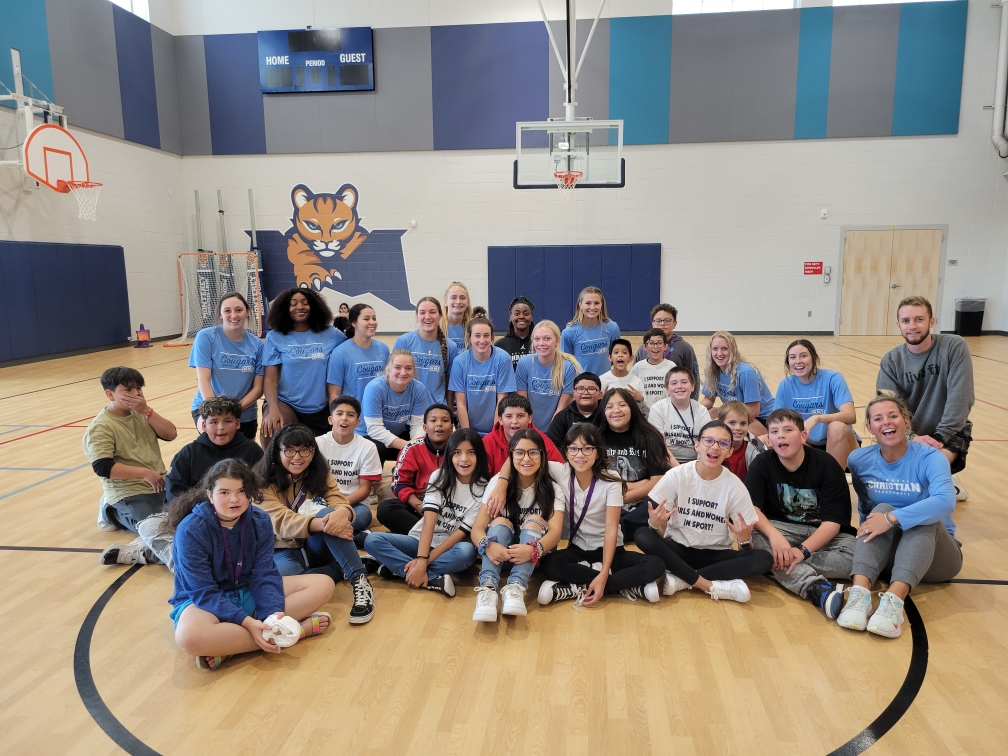 “TOGETHER.” It’s a word that perfectly describes the atmosphere in several elementary school gymnasiums recently. Girls and boys were out on the court, scrambling and laughing, being led in drills by coaches and players from two local women’s college basketball teams.

Universities and SWOC give back
“We enjoyed teaming up to promote women in sport,” said Coach Thompson. “We had kids both male and female participate and we love to give back to show what CCU and Sportswomen of Colorado is all about.”

Basketball tricks & fun!
Jazzy, a sixth grade student at Monterey, said, “They’re teaching us how to do some cool tricks and having us practice so we can be good basketball players if that’s what we want to do. And, we’re having fun.”

CCU and MSU Denver arrived during Phys. Ed. Class. They conducted dribbling, passing, and shooting drills and played fun basketball games like dribble tag and knock out.  Many of the students had never played basketball but it was impressive how they picked up a ball, listened to the coaches and players, and started having fun.

“We are so grateful and excited to have CCU supporting our kids and bringing this great event to our school,” said Director of Welby Community School, Danielle Dickson. “As a mom of two girls who played basketball all the way through high school, it’s such an awesome opportunity to build confidence, excitement, and joy in their day.”

60,000 high fives
Tessa, a fifth grader at Little Elementary said, “I learned that you make a beat when you dribble the ball and that you can make a basket with only 1 hand.” When asked how many high fives she gave, she said, “like 60,000!”

Mya Jones, an MSU-Denver senior student-athlete said “Giving back to the community comes easily for us because it’s so much fun and we enjoy it so much. It means a lot making kids happy, seeing them smile, and meeting new people. It’s awesome!”

“We thoroughly enjoyed working with the outstanding fifth graders! I know our staff and players had as much fun as the students!, said Coach Haave. “Thank you to Sportswomen of Colorado for facilitating this opportunity for MSU Denver women’s basketball to give back.”