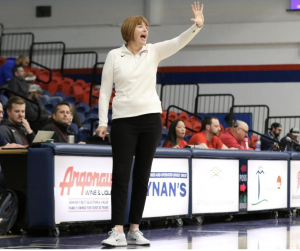 Tanya Haave, a former star basketball and volleyball player at the University of Tennessee and now the Head Women’s Basketball Coach at Metropolitan State University of Denver, will be the keynote speaker at the 49th Annual Awards Celebration honoring the best female athletes in Colorado. The event, hosted by Sportswomen of Colorado, will be held on March 12th at the Hyatt Regency Denver Tech Center and will recognize and honor the achievements of female athletes in various sport categories, including individual and team achievements, coaching and leadership, and community service.

Tanya, who hails from Evergreen, is widely regarded as one of the best dual sport athletes to ever come out of Colorado and will be sharing her story and experiences as a female athlete and now as a successful coach. She has been an active member of the Sportswomen of Colorado organization and has served as a mentor and role model for many aspiring female athletes in the state.

Haave was a three-year starter at the University of Tennessee, where she helped lead the Lady Vols to three consecutive NCAA Final Four appearances. After college, she played basketball professionally in Europe for several years before retiring from the game in 2012. Since then, she has served her community as a basketball coach where she is able to mentor and inspire the next generation of athletes.

“We are excited to have Tanya as our keynote speaker this year,” said Sportswomen of Colorado Board of Directors President, Laura Fischer. “Her achievements and contributions to sports in Colorado serve as a testament to the power of hard work, determination and perseverance. We are proud to have her share her story.”

“I am honored to be a part of this celebration and to have the opportunity to inspire and support the next generation of female athletes,” said Tanya. “I believe that by providing opportunities and resources for female athletes, we can help them reach their full potential and make a positive impact in the world of sports and beyond.”

The Sportswomen of Colorado Annual Awards Celebration is open to the public and tickets are available for purchase at www.sportswomenofcolorado.org/awardscelebration. The event promises to be an amazing evening. Hope to see you there!